GROW and POMP Your Way to Greater Serenity

Last week, I shared some of my struggles around—and possible ways to deal with—heavy, demoralizing, overwhelming tasks. And I promised to come back this week with a couple tools that Mala and I have been mucking around with in order to conquer being what Brigid Schulte calls OBL: “Overwhelmed By Life.” (Hold onto that thought; I’m coming back to it later.) So here I am, with two.

The GROW model, developed in the United Kingdom in the 1980s (or thereabouts), is commonly used in coaching to facilitate goal-achievement/performance improvement. Here’s Wikipedia’s description of what the letters stand for (there are others, but I like this one):

The POP model was developed by Leslie Scholl Jaffe to support leaders do everything from, in her own words, “meeting agendas, campaigns, difficult conversations, unplanned calls and conversations” … and everything in between and beyond. From the Social Transformation Project, POP stands for:

Because Mala and I are who we are, we decided that if we were in charge, we would add one more dimension to the model, regarding “mindset”; to wit, how will I show up for this work? What values will I bring into this space? Courage? Humility? Power? So, I’d like to introduce our new-and-improved model: POMP.

Mala and I decided to experiment with using both of these models to support ourselves in our tasks large and small—immediate and short term tasks like writing that damn email we’ve been avoiding for months as well as longer-term labors of love that never, in fact, get any love because we’re too busy getting flooded by deliverables.

Workplace Bullying and Mobbing in the United States

Such a labor of love includes the book we’ve been on-again-off-again working on for years, tentatively titled Tyranny of the Cause, challenging us in the social justice sector to be better about the toxicity plaguing too many of our organizations and, in turn, hurting our movements (transcribing, ugh! Make it stop please).

The beautiful thing about this is that it’s allowed us to slow it down and uncross our eyes so we can focus on what the hell we’re actually doing. Taking the time to clarify what the obstacles are (“I’m terrified at how disappointed and angry they’re going to be that it took me so long to respond, not to mention how annoyed they’re going to be by the actual content of my email”), first off, reduces their power. And allows us to create options (“I’m going to remember that maintaining my integrity requires that I suck it up, and I’m going to make it up to them by doing this extra-special thing that will at least demonstrate that I get it”). And then! The sweet, sweet sensation of it being done.

It’s not you; it’s the system

And in case I didn’t say it loudly enough last week, I’m here to repeat that if you’re feeling overwhelmed, that just proves that you’re a sane, conscientious human living in 21st-century America. And if you don’t believe me, perhaps you will believe Brigid Schulte, who’s researched this and talked to dozens of time scholars, including Father Time. 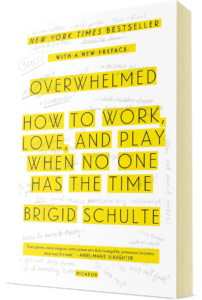 It’s not you. It’s really not.

And to be clear, she’s not the only one who’s considered this societal disorder. Here’s an article from the New York Times. One from Psychology Today. ABC News.

I call your attention to all of this to say: you get to forgive yourself for constantly feeling behind. You’re fine, actually. Just fine.