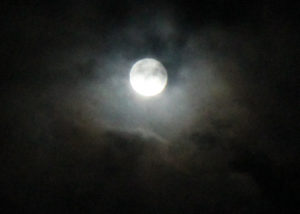 In the midnight hour, evil…

In a time like none other for most of us, the injustice is staggering: the presidential election undermined; state legislatures eviscerating democracy through voter suppression and gerrymandering; government agencies meant to protect and serve us (EPA, Education, FDA…) heading for even more gutting, perhaps into non-existence; hate crimes on a dramatic rise. Hollywood couldn’t have written a nuttier political thriller (or horror story, your pick).

If you’re like me, you may wake in the morning — or through the night — hoping this is all just a bad dream, only to be jolted back into the harsh reality. Yes, you are in the middle of a nuttier-than-Hollywood political horror story. 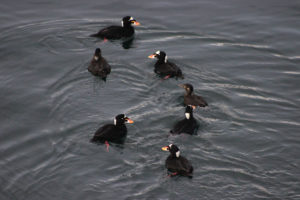 What are we doing again?

I’ve been agonizing, like many other folks, about what it is each of us can do. We want to make a meaningful difference. But given how crazily overwhelming it all is, how do we focus? What role do we assume? Do we lead or support? Where do we enter the resistance?

The tragedy of my role in this story is that I see myself as an active member of The Insurgency, fighting alongside the heroic Community Protectors, with their light sabers and their rebel holdouts, against the corrupt Doublethink government and against Newspeak. But in reality, I’m one of the extras, a speck in the crowd that only my mother would recognize because I told her where to look.

Where do you enter the resistance?

Even as a speck in the crowd, it matters to me that I play an active role. So I’ve been reflecting on a couple tools and ideas to help me do that, which I’d like to share. And I’d love to hear how others of you are reflecting on your roles in this resistance.

The tools and ideas I’ve been leaning on are:

Circles of control, influence, and concern 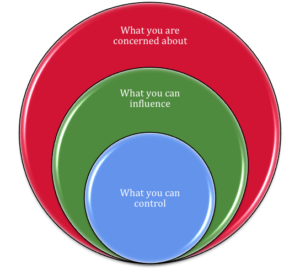 For me, I’m concerned about a lot of things. The 2016 presidential election, corruption, and subversion. Meeting my next deliverable deadline. Climate change deniers (how is it possible they still exist?) destroying everyone’s children’s and grandchildren’s futures for yet more absurdly large profits. Police brutality against and the murderous shoot-to-kill intent against black and brown bodies. Rising healthcare costs. Hate crimes against Muslims, Blacks, and transgender people of colors. Vega’s and my personal finances, and whether we’ll make payroll this month. Generations of Black men shackled by the prison-industrial complex. Immigrant families torn apart through deportation. Civilians killed by the invisible arms of drones. My mom’s health and happiness.

I’m enraged by rape culture and biased judicial outcomes that protect men and punish girls and women; by the world we’re leaving the next generation, including my nieces and nephew; by the fact that DT will be at the helm of the largest military might the world has ever seen (what the actual F*CK?!); by Republican elected officials sacrificing our country’s well-being to block all of President Obama’s proposals – even ones that were theirs to start with; by the protection of the Wall Street robbers who caused the 2007 crash and stole our money; by the 1987 savings and loan scandal, exploding after banks were deregulated, and obliterating our higher-interest savings accounts (remember when we could see a 5% APR in our savings accounts?); by the disastrous results of a Milton Friedman-esque free market society. Thanks to untethered free market capitalism, the rich line their bulging pockets through immoral lies (climate denial (it’s 2016!!!), Enron, Volkswagen) and noxious scams (subprime mortgage loans, hedge funds: I’m sorry, but betting does not equal investing). Market self-correction? Are you kidding me? It take years for even a highly regulated market to discover, uncover, and recover from these lies and scams — assuming there’s any will to hold rich white men accountable at all (see ‘Wall Street robbers’ above). Meanwhile, countless millions of us suffer untold harm, all because of kleptocratic rich white men and their craven, venomous, f*ing bottomless greed.

But worrying about it just drains me of energy. A lot of energy, valuable energy.

So what’s in my circle of control? For starters, my own stuff: behaviors, attitudes, beliefs. How I react or respond (more or less) to external stimuli. What healthcare plan I choose. How I set my priorities and use my resources. How I spend my time, renew my energies, and build capacity. Who I buy products and services from and who I donate to.

What about my circle of influence? Here, I find my close relationships — with my mom and Vega; maybe with people and organizations with whom I work and groups in which I have a leadership position.

So where does that leave my concerns, the ones that lie outside my circles of control and influence? Do I just close my eyes and hope they go away? The reality is I have the privilege to do this, and I hate to say that sometimes I take advantage of it. Sometimes it’s all I can do to muster enough energy to focus on the things I have some control or influence over.

But the weight of my concerns still nags at me, and thankfully so, as it is the source of my humanity.

Milton Friedman (ugh) advocated pure self-interest, in famous quotes like, “The world runs on individuals pursuing their self interests” and “There is one and only one social responsibility of business — to use its resources and engage in activities designed to increase its profits.” UGH. Naturally, this type of thinking creates a desire to control others in order to expand one’s circle of control. Friedman’s philosophy activates what Stephen Covey (7 Habits of Highly Effective People) calls the Personality Ethic, an ethic to influence people purely for self-interest, without concern for the impact on society. Covey suggests an alternative, more principled and value-based approach that focuses on expanding our circle of influence out toward our circle of concern.

What would expanding my influence look like? As I scan the list of my concerns, I think about Ejeris Dixon’s great piece on strategic pivoting. My three clear focus areas are: (1) defending vulnerable communities, (2) building political power, and (3) identifying alliances: creating the strategic and coordinated continuum of resistance. Which communities are most vulnerable, where can I lend support and resources, and in what ways can I build my capacity to help (e.g., learn self-defense, learn resistance survival skills, revive the underground railroad?)? Who has the political power and will to fight the DT administration? Who has sway with those in power? Who in the next generation is ready to run for political office? Who are the people with whom I want to have a deep dialogue?

Considering my circle of influence leads me to Power Mapping.

I might not have relationships with, say, my congressional reps. But my neighbors might, or my extended family. I can share stories with neighbors, friends, and communities. I can find out where they stand, listen, understand, and find common ground to move forward together — maybe to reduce harm, or to serve as part of the underground network.

I can create a personal power map, linking those in positions of power back to me through friends, family, communities, vendors I use — anyone I have contact with. What are my connections? What are the connections that exist in the communities I live in, work in, organize with?

You can find tools for Power Mapping at MovetoAmend.com and ArtsEdNow.com.

Let me not miss opportunities to add my voice to a collection of other people’s influences, so that our collective voices carry more weight. I don’t want to miss this “unpresidented” moment, the opportunity to use our collective influence to move and shift things in our collective circle of concern.

But how do I show up? What role do I take to be most useful? 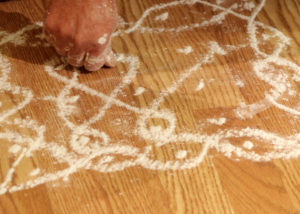 A focus on the action as the kolam emerges. Kolams.

I rarely march or go to protests anymore. For a myriad of reasons. But I can imagine supporting protesters and marchers with nourishment in the form of sandwiches and home-cooked vegetarian South Indian food. What I’m realizing is that not all of us are marchers, though I am grateful for the visibility that marchers and protesters bring. And I do need to be ready to lend my body to the masses when it’s time for all of us to march. But right now, it’s not me. Training for Change offers a useful framework on roles in social change movements. It’s a place to start to see where you might best fit. What’s your talent? What’s your comparative advantage? What do you find easy to do? Or are you a Wonder Twin, taking the shape of whatever the movement needs at the moment? Or perhaps your energy levels ebb and flow, or you’re a sprinter who does that one thing really well. Our friend Sasha D, who loves creating systems and spreadsheets, created a list of resources for the Seattle area. Just because. Because they are crystal-clear about their comparative advantage and boundless in their energy to serve.

Be intent on the action, not the fruits of the action.

Once we’ve figured out our circles of influence and concern, identified the changemakers, and determined our contributions, then we must act. And we must act with deep commitment, love, and unwavering courage, None of us knows what exactly is going to tip the scale. If someone tells you that your actions aren’t effective, ignore them. If someone tells you what else you could or should be doing… well, sure consider it, especially if you’re the last one standing. Until then, we need to be acting in concert, in ongoing waves, until we can push through, and triumph against this colossal betrayal of humanity.

[1] Stephen Covey discusses these circles in 7 Habits of Highly Effective People, and others have adapted the framework over the years.