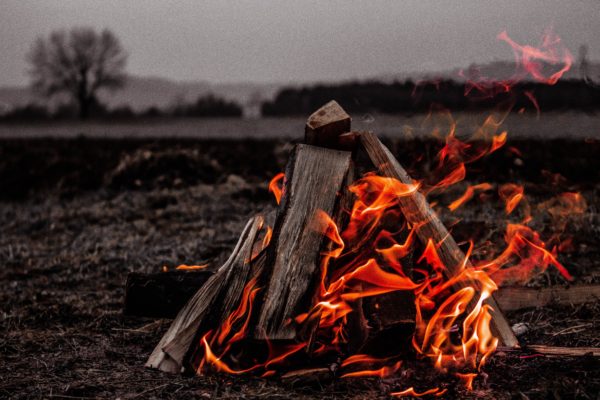 In the days when a human could casually imagine doing this (read: before March 11th), Mala and I love(d) camping. We love the wilderness, the fresh air, the birds.

And when we camp, naturally we build campfires. While building a campfire might not be my favorite part of camping, there are certainly enjoyable aspects of it. The thrill of self-reliance, the sense of adventure and resourcefulness and grit, the anticipation of warmth and coziness.

So then the fire’s built. And it’s warm and cozy, and we’re roasting marshmallows, and the sun is gently setting and the air is turning pleasantly cool and sigh, this is the life.

…Until it’s not, because now it’s legit cold and kind of dark actually, and the s’mores are gross and extra, and we’re almost out of firewood. So now we have to go find more firewood, except now it’s cold and dark, etc., see above. And though it’s tempting to call it quits, I know that I’d rather keep the fire going now than suffer the chilliness of no campfire a couple hours from now.

So, somehow, I find the stamina to withstand the cold, head off for more firewood, and keep the fire going.

When I start something, I’m energetic. I’m enthusiastic. I’m inspired.

Back in 2013 when we started our business, I decided that we needed a database to track all our contacts. Somehow, this database was going to be the key to our business’s success. So, I researched the best databases for small businesses; I entered our initial contact information with great gusto; I felt the warm glow of an incipient output process that would manifest in business growth.

I was inspired, is what I’m saying. Vision, focus, immediate gratification.

But the slight chill I’m feeling now is way less severe than the bitter cold I’ll feel later if I don’t find a way to feed my database, blow on it a bit and move some wood around to give it some breathing room. (I am totally going to beat this metaphor into the ground.)

One of our team’s current projects is to clean up our database and make it actually usable, as opposed to a relic gathering dust on the bookshelf. So, over the past few months, I’ve spent many, many hours (probably not that many hours; probably it mostly just felt like that many hours) cleaning, updating, adding notes.

To continue doing this, I’ll need the sustainers. I’ll need to draw on a different bank of reserves to keep this going, given the initial excitement of getting it started has worn off.

This was brought home to me while I was listening to a recent episode of one of my current favorite podcasts, Write-Minded, called “Writing What Sustains You.” Among other things, they encourage us to ask ourselves what sustains us. They note the Latin roots of “sustain” (“to give support; to hold up”) versus “inspire” (“to blow into; to breathe upon; to excite and inflame”). They say: “Being sustained is different from being inspired, and it’s worth looking at that difference. To be sustained means that you’re working on something that supports you, that nurtures you, kind of like food.”

What are the reserves that sustain me? Oddly, for me at least, they are only tangentially related to the actual goal.

Those reserves come not from focusing on the specific project at hand, but rather from a commitment to the “practice” or “discipline.” I can’t rely on the excitement of the new, so I lean on the comfort of the familiar.

I think about the structures I put into place when I set a new goal or intention for myself:

p.s. The database is now complete, by the way (thanks less to me than to Griffin’s data entry plus the enormous amount of work Megan put in to bring it up to date and customize it). Look out, world, I’m coming at you! …in maybe several months, from six feet away behind a mask with gloves on. You won’t know what hit you.