You Are More Than Your Job 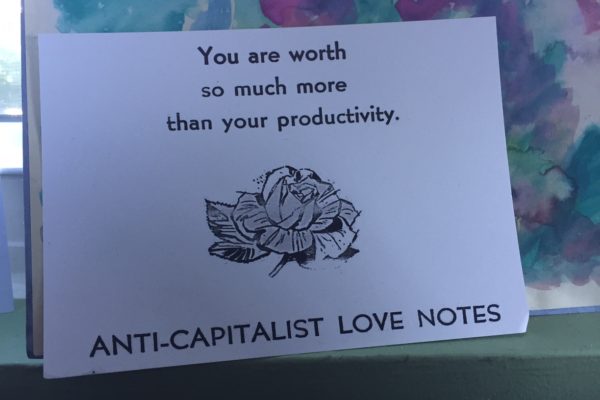 When I was flaming out of the nonprofit fundraising field at the end of 2014, all I knew was that I needed a break. I had spent a few months trying to identify a career pivot, but I felt so lost, exhausted, and overwhelmed, I couldn’t even articulate what I wanted to do beyond “please never ever make me write another grant.”

After I hired my replacement, I thought I’d take a little time to rest, maybe go see my sister, and reorganize my spice cabinet. (That is, in fact, what I did on my first day off.) Then, refreshed and restored, I’d pick back up looking for another job. I thought it’d take a few weeks, maybe two or three months, tops.

Little did I know that it would be over two years before I returned to full-time work.

In the time between, I went through long bouts of unemployment and periods of underemployment where I did a menagerie of tasks for money, none of which involved fundraising. Some didn’t last long (barista, dog walker, front desk of a shady chiropractor), and some lasted longer (beer store clerk, self-defense business admin, front desk of a body-positive wellness center, some really fun freelance operations projects). I applied to about 50 jobs and had at least that many informational interviews.

I knew I was doing what I needed to do – try out a bunch of different things to find my way to more heart- and natural-skills aligned work – but still, it was a pretty rough period.

In fact, I felt awful.

And I felt even worse because I knew I was one of the lucky ones. I’m white. I have a college degree that I didn’t pay for. I have an established, gainfully-employed partner who was able to cover rent for months at a time. All your privilege are belong to us.

But even with the cards stacked overwhelmingly in my favor, I couldn’t make it work. I was supposed to have it all figured out, but I couldn’t land a stable, salaried job. I was failing by every social measure of success.

The shame of being in that place – by choice, no less!! – and the constant state of uncertainty of not knowing when or how it would end (Will this be the job that will last a few years? Is this my new career path? Will this next step be the movie moment that changes my destiny foreverrrrrr?) took a tremendous toll on my mental health, my relationships with people who cared about me, and my ability to successfully find work.

When I saw the NYT’s recent article about job search depression, all the memories of that not-too-distant time came back. It took a year (a year!) in therapy for me to understand one of the article’s main points: you are not your career.

When people imagine job-search depression, they often attribute it to financial instability and frequent rejection, but it turns out that “identity is a much bigger piece of the puzzle than people had previously thought,” said Dawn R. Norris, an associate professor of sociology at the University of Wisconsin-La Crosse and the author of “Job Loss, Identity, and Mental Health.”

“In fact, many of the people in my study said it was the most important thing to them, even beyond financial problems,” she said. Those who listed financial concerns as their top source of stress often cited a perceived loss of identity as a close second.

A lot of the grief and despair I was feeling I blamed on my dwindling savings and endless applications on a highway to nowhere. It took me way too long to realize that what was corroding my sense of self was equating who I am with what I do for a living.

I had made the deep, wounding mistake of correlating my worth with my career.

The irony that it was in unemployment where I was able to confront that myth is not lost on me. Without a job to lean on to define myself, I was forced to sit and look at where I was, and see that even if I didn’t have a paycheck…huh, I guess I still matter, don’t I? My value is inherent and unconditional.

I share this story because it’s so universal, and unfortunately common for my generation. I still sometimes feel pangs of shame at that period of my life and the lasting impact it had on those who care about me, and guilt about ultimately finding salaried work that I enjoy when so many others remain stuck or have fewer options.

And I also know that without it, I would never have gotten to stare in the face of spiraling uncertainty and say, okay, here I am. It’s just me. And just me is enough.

(And you should see my spice cabinet.)

P.S. Need help clarifying a purpose, direction, and a path? Check out our next Intentional Life Planning workshop!